Knowing the implications of our very next endeavor can be impossible to know. Which, often, is for the better.

Back in 1962, when my mom was 6 months pregnant with me, the University of Edinburgh extended a slot to my dad for their surgical training program. Dad was thrilled to secure a competitive admission to one of the great institutions of the UK.

A great adventure began. Deeper into the world of medicine. Far away to a new continent, by air to London, then the famous Flying Scotsman train to Edinburgh. A new culture, new people, new life style. Oh my, oh my.

He fully intended to return armed with new knowledge to take a teaching post in Kerala, a lush coastal state in India. But once in Edinburgh, the faculty urged him to “go to Chicago” for hard core trauma experience, in a surgical residency.

So he shared the long term value of such a move with my mom, changed plans and sojourned to the Windy City. When I was around 2, my mom joined him and I was dotingly taken care of by my grandparents, particularly my mom’s parents, I believe. Finally, just before turning 4, my father insisted that I join them in the U.S.

Given the price of air travel, the most prudent option was to arrange for Air India flight staff to chaperone me all the way to JFK. My dad’s father, Chachen, a PR minded trial lawyer, implored the largest local paper to “see” the editorial opportunity right under their noses: the youngest Indian to EVER travel to America was leaving in 2 weeks. This idea sold its way on to the front page. That is the photo seen above.
Just a couple of years ago one of my dad’s sisters, Baby Auntie, shared more details of the actual day of departure. In truth, the excursion was probably pretty unpleasant (for me, that is). I was under the impression that all my dad’s siblings, and his parents, were getting on the airplane with me. As my dad’s family has 14 children and he is the 2nd oldest, many of these siblings were not much older than me – – and we played together all the time. So what a fantastic idea! Getting on a jet plane, with all of them?? I was out of my mind excited at such a prospect. My aunts and uncles were mortified by the reality, and no one explained what was about to happen. I was a bit puzzled when only Chachen walked on to the 707 with me. Shortly after the stairway was rolled away, they brought it back.
“This child is making a ridiculous fuss. He can’t fly with us. No way.” Having anticipated something a problem, Chachen purchased a big bag of colorful candy and walked back on board. He applied his charm and experience convincing juries, and convinced me to stay. Of course, the candy played a big role too. Damn that candy.
Side note: I do love air travel which I don’t understand. Shouldn’t I hate it? Perhaps it is the fact I had amazing family at both ends of the journey?
Upon landing in JFK, I vaguely recall a man walking up to me with a Tonka truck and saying, “Santhosh, I am your daddy.” It was our first meeting. I was about to turn 4. What an unforgettable moment, particularly for Dad, eh?
Often, I have reflected on the sheer sacrifice my parents made. And the sacrifice made by parents across time. As I have two boys, one nearly 6 and one who is 4 1/2, the notion that I see them for the first time at such an age is breathtaking.
What if Dad had known that his 6 month program in Scotland would “take him 4 years forward” before he saw his child? I am not so sure he would have boarded that first flight. Nor reaped the benefits of that action for himself, his family and his many siblings. But we cannot see what the future holds. All too often, that may be for the better in the long run. 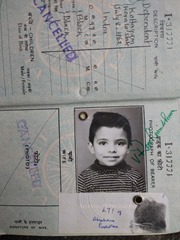 Hello. I am a freelance writer. I live in Bellevue, WA. I write about my life’s experiences, my family and my travel.