One frigid evening in the dead of winter of 1970, my dad was tromping around from door to door. Why? He was selling peanuts to raise money for the Kinsmen. (Kinsmen is a men’s community service club.) But “frigid” was an understatement. Winter in the Canadian prairies is cold by anyone’s standards. Needless to say, underdressing worsens matters.

When Dad knocked on the door of Abe and Elsie Suderman’s home, Mr. Suderman greeted him. Being an inquisitive man with a whimsical way of being, Abe noticed my dad’s low cut dress shoes, soaked by the snow that stumbled in. So, he asked, “Is that the shoes you’re walking around in?” 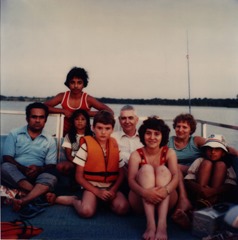 Two Families, Out on an Excursion
Mary Pachikara, Copyright 1975 (Click for larger image)

My dad looked down, chuckled and said, “Yes.”

In fact his feet were freezing and the evening of volunteering was not what he had expected. The two men knew of each other by name at best. Then again when you live in a town of 2,700 people, you kind of know everybody. One was the postmaster. The other was a surgeon.

“Well come on in, let’s get those shoes dried off and warm up your feet,” Mr. Suderman said without hesitation. He was always a generous soul, and always one of action. Mrs. Suderman made some coffee to warm up my dad. Together, they mused about the winter, clothing, and other topics with surprising ease. This conversation would be the first of many.

“Here,” Mr. Suderman said, holding out a pair of rubber overshoes as my dad prepared to leave. “You should use these on for the rest of your evening. Don’t bring them back, I can come by the clinic tomorrow and get them.”

A year later, Mom and Dad had decided to find an empty lot and build a house. Such a lot was right next to the Suderman’s house.

In a phone call today with Mr. Suderman, he recalled his second conversation with my dad. “Your Dad came to our place in 1971, mentioned his desire to build next door and asked for our permission. I have never in my world met a guy like your dad. Who asks for someone else’s permission like that? I have to say we were so lucky your family moved next door.” 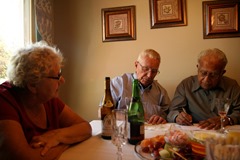 It was the meeting of goodhearted people, who inspired each other for decades to come. We had many good days across our two homes that I have often remembered. For example, on countless afternoons my sisters played, and squabbled with their son Carrie. In the end, those three always came back together. With a chuckle in her voice, Mrs. Suderman recalled, “Carrie would come home in a huff. Then 15 minutes later the front doorbell would ring and your sisters would say, ‘Can Carrie come out to play?’ I would go ask him and he would always go right back out.” Their two older daughters, Deb and Barb, babysat us when needed.

Our friendship made those fleeting six years so much richer.

Wouldn’t life be so different if the less obvious factors of living influenced our decisions? For example, choosing a home based on the neighbors, rather than the floorplan.

It many instances, it would turn our existences upside down, in a good way, no?

Hello. I am a freelance writer. I live in Bellevue, WA. I write about my life’s experiences, my family and my travel.